This is the original frame building purchased in 1910. 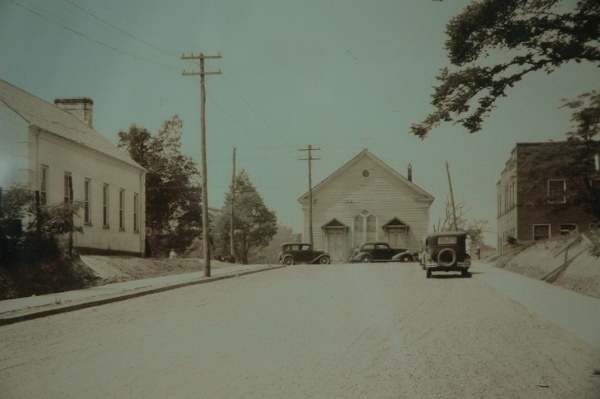 Early settlers to western North Carolina brought their religious traditions with them, but they rarely had the benefit of a pastor of their own denomination to lead them in worship. The first ordination of a Lutheran pastor (The Reverend Robert Johnson Miller) in NC was in 1794. Pastor Miller served congregations of Episcopalians, Lutherans, and German Reformed. Establishing a Lutheran Church in Morganton was a long and sometimes difficult process. Groups of Lutherans met in homes, the town hall, a school, the court house and other places. In the beginning, pastors were supplied by Concordia College and then the Tennessee Synod.
Lutheran families in Morganton were determined to have their own church and worked diligently to make it happen. The families purchased a building and lot on North King Street from the First United Methodist Church in 1910 for $600. The church was known as Morganton Evangelical Lutheran Church and was part of the Morganton Pastorate, made up of three churches. Through the next twenty-two years, there were several mission pastors assigned to this pastorate. In 1928, Lenior-Rhyne College provided support for worship services and Sunday School.
Finally, in the fall of 1932, the Reverend Dorus P. Rudisill, Ph. D. came to the Morganton pastorate as pastor. Under his tenure Calvary Lutheran Church was organized as a full-fledged congregation under the North Carolina Synod of the United Lutheran Church in America in June of 1933. As the pastorate of three churches was dissolved, Dr. Rudisill answered the call of Calvary Lutheran Church and served as the pastor until 1942.
In September of 1936, the original frame building was torn down to make room for a new brick building. During construction, the congregation met in the newly constructed Community House across the street. The first service held in Calvary’s new building was August 8, 1937.
The church continued to grow in the ensuing years with Pastor Albert W. Lippard (1942-1949) and Pastor John Henry Sigmon, Jr. (1949-1983). Pastor Sigmon was the longest serving pastor at Calvary. In 1956 the congregation voted to construct an education wing to house classrooms and the pastor’s office. By 1961 Calvary had 180 active members.
After Pastor Sigmon’s thirty-four years as pastor of Calvary, Pastor Michael L. Collins served (1984-1989). During his tenure, the Lutheran churches on the national level merged and the Evangelical Lutheran Church in America (ELCA) was constituted in 1987. In that year, Calvary set up a facilities task force to develop recommendations on how the growing needs of the congregation might be most effectively met.
Pastor Collins was not here to see a new building project completed. After his resignation in 1989, an interim pastor (the Reverend Royal A. Yount) served while the call committee sought a new pastor. The Reverend Jesse David Hill was called in 1990 becoming the fifth pastor at Calvary. He served until 1997.
The building committee began meeting again in 1991. The process of planning, financing, and getting approval from the congregation took several years. Finally, in September of 1994 Calvary celebrated the groundbreaking for the new addition. The addition was dedicated in January of 1996.
Pastor Hill resigned in October of 1997, and once again Calvary needed to call a new pastor. Dr. Michael F. Riley became the sixth pastor of Calvary in August of 1998. During his time at Calvary, the church continued to grow and serve the members of the congregation as well as the community. In 2006 another building project was undertaken as a new pipe organ was purchased and the sanctuary was remodeled to accommodate it. Services were held in the New Fellowship Hall during this construction project. The new Casavant Frères organ was dedicated in the fall of 2006.
In 2007 Calvary Lutheran Church entered into an official sisterhood relationship as a global mission partner with the Spirit of Joy Lutheran Church in Bisas del Valle, El Salvador. A group from the congregation visited El Salvador in 2008 to participate in the dedication of a new church building. Calvary continues to support this church both spiritually and financially.
Upon Pastor Riley’s retirement in the summer of 2014, Pastor Mary Miller-Zurell of Hickory served as Interim Pastor. In September of 2015, Pastor Paul and Pastor Lauren Carlson were called to serve as Calvary’s new co-pastors. Calvary Lutheran Church celebrates its 85th year in 2018. People of the community have brought their faith, hope, needs, gifts, and vision to Calvary for a long time. Each person who enters the doors receives God’s grace and renewal of spirit and faith. May God grant that it continues for many years to come.
Calvary Lutheran Church is an active participant in the community of Morganton’s faith journey. The doors are always open and all who will come are welcome.